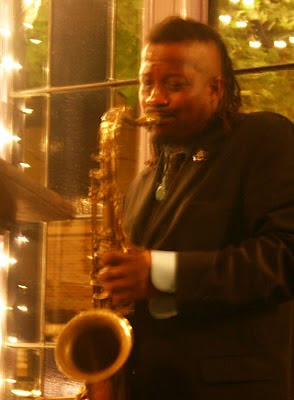 On August 2 at Duff's, Raven Wolf provided musical entertainment on various saxophones and flutes, playing mostly his own compositions but also Thelonious Monk's "'Round Midnight." Click here to hear a sampling of Raven Wolf's music.

The next Chance Operations readings will be held at Duff's, 392 North Euclid, on September 27, October 25, and November 22. Doors open at 7:30 p.m.; cover charge will be $3. Musical guest on Monday, September 27, will be Dave Stone. Further details to be announced.
Posted by Tony Renner at 2:08 PM