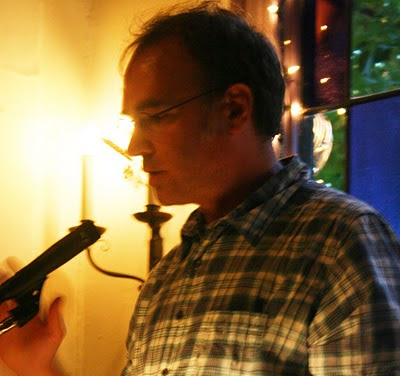 On August 2 at Duff's, River Styx editor Richard Newman read a selection of his poems.

One of my composition students writes,
“Leave her lie where Jesus flang her!”
Reelect Ken Ortman your Soulard Alderman.
Stomach acid gnaws. A siren grows louder.
From the tower of St. Peter’s and Paul’s
one can see, over the brewery, a cemetery—
the town’s shadow lengthening toward night.
Plastic beer cups gather in doorways.

“Leave her lie where Jesus flang her!”
The town’s shadow lengthens toward night.
A Port-a-Potty steams on the corner
of St. Peter’s and Paul’s. A siren grows louder.
Two days after Mardi Gras, on the vanity,
plastic beads slink between lotions and powders.
One of my composition students writes,
“Jesus had a huge impact on Christianity.”

(From Domestic Fugues. Originally appeared in Tar River Poetry, Fall, 2006)
Posted by Tony Renner at 11:03 AM