Stefene Russell To Read on Monday, June 14, at Duff's in the CWE 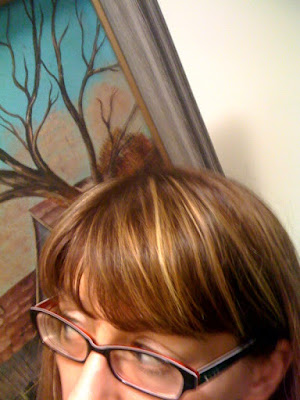 The next •Chance Operations• reading will be Monday, June 14, at Duff's in the Central West End. Doors will open at 7:30 p.m.

Stefene Russell grew up in Salt Lake City, in a hundred-plus-year-old house built by a notorious polygamist; it was full of spiders and secret trapdoors for hiding extra wives and children. She is the culture editor at St. Louis Magazine, former co-editor of the late 52ndcity.com and a member of Poetry Scores, a collective dedicated to translating poetry into other media. In 2007, Poetry Scores published her long poem, "Go South For Animal Index," as a beautiful little letterpress book with a full-length CD inside. She is currently working on an epic (EPIC!) work of prose-poetry that's titled, at least for now, "Orphanus."

The watcher turned her face into the dark
with a werewolf's eye for splendor,
and what was there to find?
High as trapped gaslight
caught in trees, high on a kind
of phosphorescence
(White, purple, pink)
A vision of
Striated lives
gone unstrung. Foxholes,
teacups hung on hooks,
Shampoo sets, sinkholes
and conversation pits.
Little lavender?]colored mints
sitting in a dish
for twenty years.
Purple glass grapes
strung together with rusting wires.
What use do you have for your hands,
man? What use do you have for your
hands, woman? Why no more nosegays,
no more funeral wreaths woven
from backyard flowers?
Why won't you read the book
of spoiled petals, drunken tulips
hanging after rain?
Fear carried close, a dried
mouse heart hidden in the chamber
of a poisoner's ring.
These flowers trembled after sundown,
White lilacs visible after dark,
little boys riding bikes past curfew
and hanging from clothesline poles
in the bruisy dark, knowing
how their not?] knowing makes them tough.
Decades from now,
they'll notice some ticklish perfume
from yards away, a song they can't
remember the words to, or the way it ends.

-- Stefene Russell
Posted by Tony Renner at 2:37 AM No comments: 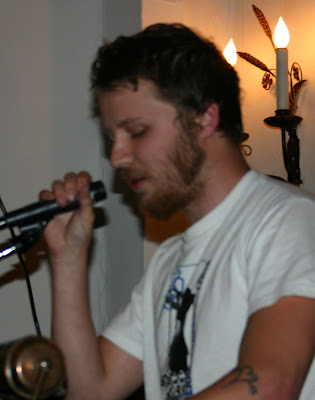 -- Sean Arnold
Posted by Tony Renner at 8:28 PM No comments:

City Lights on the Bus 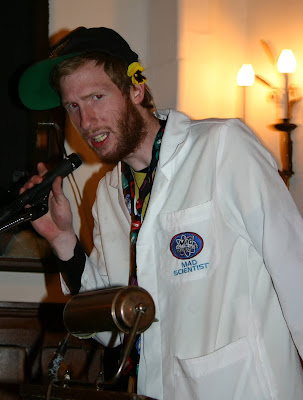 Jacob Cohen knocked out the audience during the open mic portion of the •Chance Operations• reading on May 10.

city lights on the bus

bus rides
flipping thru a poetry book
the 1st anthology of published poets i actually plan on reading
stepping up my game
living a full life
there are secret conversations hidden right in front of our ears
it's moments like these---
the beautiful trumpet woman with dreadlocks boards with 3 others
musicians, yes
gyspies? maybe, but beside the point
she has a young face, brimming with all those young experiences had these days in well-placed rags about soft-skinned bodies
we both want kombucha, but settle for beer and maybe there's something to this---
don't go too far
it's not safe
and i'm not famous
saint loser with nothin but a cigarette seems a trip now, the 30 bus comes intermittently, between thoughts of cartoonish existence and dreams of broken glass shards passing thru the jugular of (insert dead white man)
inspired, well less than inspired by poetry in motion, i keep eyes glued to page, but ears trailing towards the ---
i think she & her musician friends is headed toward red & black, i have a feeling---
it doesn't matter much, who is talking, just that i probably shouldn't be listening
we missed the bus, an hour
wait now
no, saved by the honk of a horn as two white people board the wrong bus
they are not us
i serenade sean to a ferlinghetti poem he has read before
it's all been read before
it's all been said before
we've all been dead before
i wander back to internal discussion with desire
she says i need not question, knowing damn well that this IS what's best for the both of us
i keep forgetting how much i've forgotten
this close to the brink of determination
eternal stagnation
the middle of a poem IS the end of a song
and a long
drawn-out pause can pass by in a blink
the city's plugged-in, it don't have to think
the city ain't burning
the city IS a suburb
the city got the PO-lease
the city died in a freak chemical spill, but won't keep it's fuckin eyes shut
the city IS a blank white page filling with dark red drips
the city IS a poorly placed question
a poorly worded answer
the city
THIS CITY
THIS CITY
smells like colon cancer
the city thinks one thought:
that IT is some final statement.
but we all wash away in the flood...

-- Jacob Cohen
Posted by Tony Renner at 8:55 AM No comments:

Felix Dowsley pulled double-duty at the •Chance Operations• reading on May 10. Felix not only played drums with the jazz trio Udi's Refugees, who provided music throughout the evening, but also read the following poem during the open mic portion of the evening. 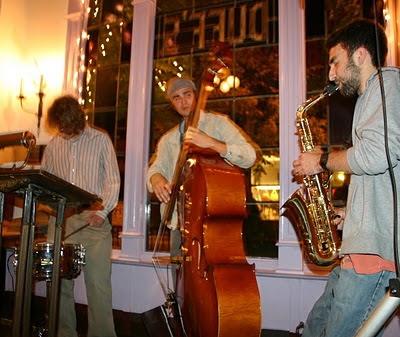 Udi's Revenge were the musical guests at the May 10 reading.

Felix Dowsley, drums, said the trio "played all standards: 'My Favorite Things' (as done by John Coltrane), 'Take Five' (Dave Brubeck), 'Now's the Time' (Charlie Parker), and 'So What' (Miles Davis), etc." The other members are Paul Antion, saxophone, and Stefan Santiago, bass.
Posted by Tony Renner at 1:58 AM No comments: 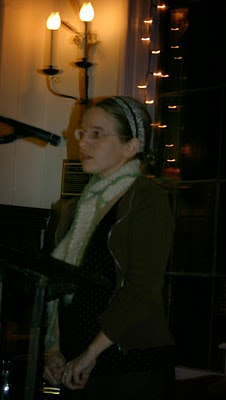 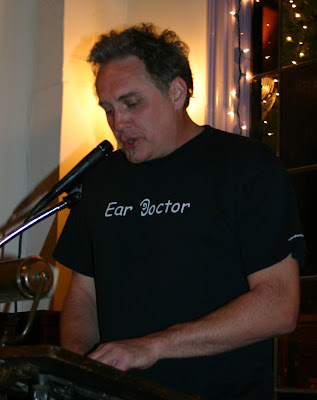 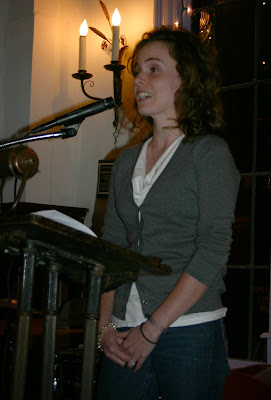 The next •Chance Operations• will be Monday, June 14, and Monday, July 26, at Duff's in the Central West End.
Posted by Tony Renner at 4:47 PM No comments: 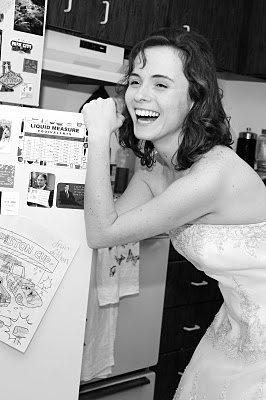 -- Molly McNew Ebel
Posted by Tony Renner at 8:19 AM No comments: 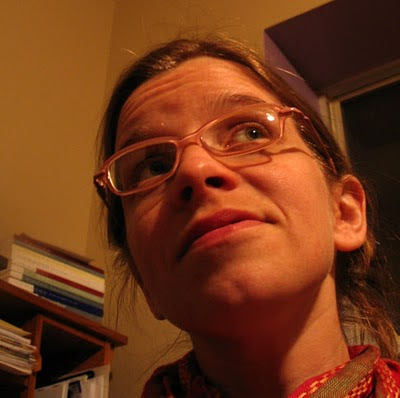 Erin Quick will be one of the featured readers at the Chance Operations reading on Monday, May 10, at 7:30 p.m., at Duff's, 392 North Euclid Avenue, in the Central West End. Also reading will be Molly McNew Ebel and Brett Lars Underwood. Admission: $3.00.

Erin Quick grew up in Columbia, Missouri and now lives in South St. Louis. She holds a B.A. in English-Creative Writing and a Certificate in Women’s Studies from Webster University. She has been a feature poet at Saxifrage Press, and has read at the River Styx Hungry Young Poets reading series. She has a poem forthcoming this spring in the chapbook Burleycue. She is committed to social justice and building community through literature.

I am not a boy, though sometimes
I wish I could be for you. Sometimes

feels soft, permeable, and I laugh
instead of cry. I am not a boy.

This is not for you, though
the word love comes anyway.

Brett Lars Underwood Reads at Duff's on Monday, May 10 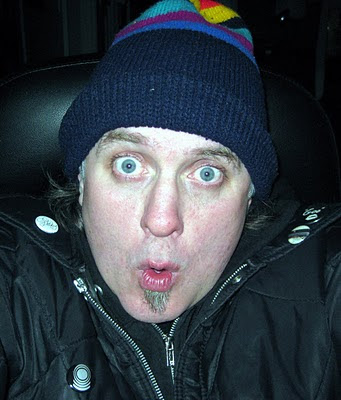 Brett Lars Underwood will be one of the featured readers at the Chance Operations reading on Monday, May 10, at 7:30 p.m., at Duff's, 392 North Euclid Avenue, in the Central West End. Also reading will be Molly McNew Ebel, and Erin Quick. Admission: $3.00.

Brett Lars Underwood is a bartending gadabout who writes, promotes and produces happenings and mishaps in St. Louis, Missouri. He's quicker with the stink eye than verbal reprimands and favors the brushback pitch over preemptive warfare. He has the wingspan of an albatross and would prefer cash.

Maybe someday, but not

You glow and
I taste you in the moonlight
My tired lips remember you in a way
that
would disgust your husband
and confuse your children.
If your fruit hung on trees
populations would go mad
like they do
and populate deserts
never wanting for water or
other spices.

And I feel no shame
in these dreams.

But to make them best
we would have to
align tiger stripes on
the shade of the moon.
Shuffle logic;
Break the flying buttresses
of ancient architecture;
Finger fuck Shakespeare fans
on CNN.

All fun and reckless activities: all dangerous.

We would be better to
change society and
and inject vodka into nuns.
Or swill melted nickels with
financial analysts

There it is in the glimmer of a star.
I hear it in the sublime verse.
I hear your moans as my back creaks.
I hear the echoes of promises.

-- Brett Lars Underwood
Posted by Tony Renner at 8:51 AM No comments: