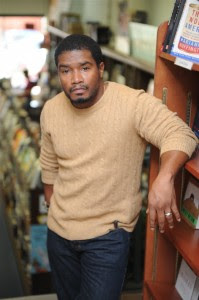 Jason Vasser will be a featured reader at the •chance operations• reading at Tavern of Fine Arts, 313 Belt Avenue, on Monday, January 25.

Doors open at 7:30 p.m.; admission is FREE. [Note: Tavern of Fine Arts opens at 5:00 p.m. for pre-reading dinner and drinks, which will also be served throughout the evening.]

Jason Vasser lives and writes in Saint Louis Missouri, where he earned a Master of Fine Arts degree in creative writing from the University of Missouri – St. Louis (UMSL). His poetry has appeared in Blast Furnace, The Sphinx Magazine, Prairie Gold: An anthology of America’s Heartland, among others and was recently featured in the St. Louis Post Dispatch in an article written by Jane Henderson titled “Poetry can be an early form of artistic response to trauma”, in response to issues in Ferguson, Missouri. He is the author of the chapbook, Agapornis and has a full length collection of poems Shrimp forthcoming.

Jason believes that building relationships sustains community. Over the past few of years, he has worked with the St. Louis Poetry Center (SLPC) as coordinator for the Poetry on the Plaza reading series and as Assistant Curator of Poetry at the Point, and endeavors to continue working to bring the literary community together through programming and collaboration.

Now a board member at the St. Louis Poetry Center, Jason served as curator for the SLPC’s benefit gala honoring Dr. Maya Angelou. This event featured local literary legends, musicians, modern dancers, and an up and coming visual artist. While often working behind the scenes, Jason also reads his poetry at local events, large and small, to share in the recitation of poetry with his elders, contemporaries, and for the literary enthusiast. His work lives on and off the page as he performs spoken word poetry at some events, while also reading at others; Jason is a performance poet, activist for racial equality, and educator.

With a degree in cultural anthropology and a Master of Fine Arts in creative writing, Jason weaves art and science to bring to life the patterns in life that unite humanity, while also speaking to his experience as a minority. Tracing his ancestral homeland to the Bamileke people of Cameroon, in West Africa, Jason currently uses his poetry as a bridge to connect the past, present and future.

Jason says, “Regardless of your cultural background, poetry is a bridge we can use to communicate.”


Poetica in the round
After Lawrence Fertinghetti

Poets, lift your heads
put down pencil and pen
the sun is abound, though rain
is around     the corner, now is time
to open your doors and
greet the sky,
the sprouts
between concrete,

come down
come out, from your coffee houses,
and Ivory towers, your soap boxes
and greet the wind.

Down from your gated,
out from the ground level,
the trees lean in desperate need
lift them in verse – there is no time
as we see ash,

night and shadow approaches
stay, don’t leave
there is No time for the artist to hide
in books, writing pads, laptops,
libraries, we must take it to the street

make time to listen,
poetry isn’t a secret society
we live, work, we write
and play where everyone else does
the hour of pondering is over,
put down your mind
pick up your heart

let’s talk like those around which we live
and not use big words,
treat every word like pepper
to a chicken needed to feed the village. 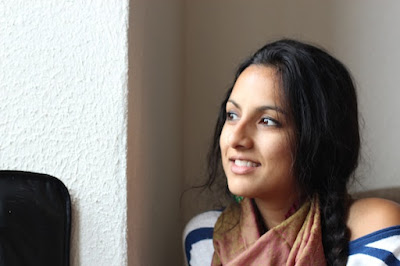 Mallory Nezam will be a featured reader at the •chance operations• reading at Tavern of Fine Arts, 313 Belt Avenue, on Monday, January 25.

Doors open at 7:30 p.m.; admission is FREE. [Note: Tavern of Fine Arts opens at 5:00 p.m. for pre-reading dinner and drinks, which will also be served throughout the evening.]

Mallory Nezam is a public artist who provokes creative civic engagement and brings to life public spaces of her city. She is Founder & Director of STL Improv Anywhere and Co-Creator of the Poetree Project. In addition to public art, Nezam has been publishing short fiction, non-fiction and poetry for years. She published her first (and arguably her best) poem at the age of 10. Nezam's work can be found in P I E C R U S T Magazine, the Occidental Review, and Art Animal Magazine. She has won awards for her creative non-fiction and short fiction.

The light filtered in in a dirty way. The windowsill was dusty and pale walls hugged light around the room as though it were steam. This was the kind of light you could see.

Ivelina’s wrist and watering can were illuminated as she stood arrested, staring out onto the rooftop patio. For a moment, this image held still until a house fly flew into focus and Iva’s gaze moved. She looked down at the empty watering can in her hand and then back out the window.

Zachary came home that night with the sound of a door slamming. The sound triggered her animation as if he himself was nothing more than a door slam. A thump in her chest, and it went deeper. It was the first time she’d heard her heartbeat like this. It was the first time she had truly felt her heart beat. There were wisterias crawling up the gate grate, the slowly aging rust adding a decided charm to the roof. Rooftops like these were hard to find in Chelsea. They were even rarer for those making a living off of little more than hope, which for Zachary and Ivelina came in the form of naïveté and in accidents they couldn’t confront. Hanging trellises, wrap-around vines, potted plants and rows of gardenias made the roof seem simple and old. This is where Iva usually stopped for an 8 o’clock visit: water, rest, regain. The quiet communion with plants followed long days as a cocktail waitress. Most nights Iva continued on to Zachary’s studio, helping with boom mics, holding ladders, coffee runs. Thursday afternoons she was the pianist for the Vitrolics’ private parties. She is far more exceptional than anyone there ever notices, and more exceptional that she can comprehend herself.

And then she heard him in the stairwell, a mixture of sounds, a hazy recognition of the corresponding movements. But today, she couldn’t envision these familiar gestures, losing the memory as though he were slowly disappearing. There are only so many sounds you can hear within a person: a stomach gurgle, a jaw click, a deep cough, a heartbeat. But this heartbeat was different. Have you ever felt a heartbeat within yourself and realized it was not your own? Have you ever felt a stranger’s heartbeat within your own body and realized it was a part of you?

“Nie ne obichame tuk zaedno,” Ivelina’s mother would always say. “Why aren’t we loving here together?” She would say this when she was mad or when there was a disagreement between the two of them. Iva never used this with Zachary when there was a disagreement. She chose to keep silent. Iva’s low-leaning gaze focused on Zachary’s foot, his tattering blue Converses faded from the sun. He’d made his way into the kitchen, kept still at the entrance with one foot draping the border. Iva raised her eyes to scale his torso, identifying his structure.

When his face came slowly into focus she could see in his gaze plain bewilderment. She followed his eyes to the puddle of water underneath her feet, her house shoes soaked through to an entirely different hue. She looked back up to Zachary, the watering can still in hand.

“Well,” he uttered. “Did you fall asleep or something?” He looked at her. She felt him looking at her in the way that people watch news segments of things perturbing—concernedly, but distant. Iva moved her eyes to the watering can in her right hand, rust eating the edges near where the handle touched the base. A banjo struck up across the apartment alleyway and Iva’s hairs vibrated to the hum. Zachary looked disturbed and then began to speak, but didn’t. He only opened his mouth and inhaled. Iva’s head had turned slowly to the window.

“I love strings.” The statement started emphatically and waned toward empty, toward solemn. She stood again facing Zachary with the watering can still clutched in her right hand. “Well, I would love it if you would get out of that puddle, Ivelina. What did you do to yourself?”

“I—...” Iva lowered her eyes towards her feet again, turned toward the can. She looked back up to Zachary who never wore shoes indoors and who never understood her culture of house slippers.

She carries the weight of her past life undetected. Ivelina is from a place where trains run slow and where the grace of a woman is in her silent curves. It wasn’t silence that made her leave home; it was the fear of it. On cold winter evenings, if she kept her breath low, she could uncover the sound of Nothing. There are some people who strive to find this. For others, for Ivelina, it is obscene and violating. When her grandfather closed her palm around an envelope full of money and the ticket, she heard that silence again.

Her mother was waiting for her on the edge of the pond, half obscured by cattails swaying wantonly in the breeze. She touched Ivelina’s hand; they made a paper boat out of the envelope and she asked Ivelina if she wanted to jump in. Her mother smirked slightly as Iva turned to her, questioning.

She realized she was moving toward noise.

Noise was busses screeching, accents, accidents. It was cleaning someone else’s bathroom. Forgetting. It was hospitals and watering cans. It was not knowing enough English to get a job; but you didn’t have to know English to fuck.

“Are you going to help me tonight?” He brushed her arm, avoided her spill. He manufactured a grin to counter his earlier honesty and she imagined potting soil, digging holes in Bulgarian terrain and dropping soil in his shoes. She could see his look of pure and utter fear. She could feel his hand tremble. Where she could have trembled, too, the baby kept still.

The difference between who we are and what we become is a chasm that can echo like canyons until we construct our own solid ground. Ivelina left with two suitcases in hand, Zachary’s shoes tied to one. She walked down the road during the 8 o’clock evening lull. There were telephone wires overhead that she didn’t even notice.

Zachary had expected that she would go home. But she went south. At a rest stop, she played piano for an empty bar. Mid-song she stopped, closed her eyes and imagined the baby taking over for her in the way that some trees can grow back from nothing. She sees their branches reaching up over the ledge of the window despite the hot, dry heat. Despite the dead wind that presses the walls of the room. This new home is a transition. It is not an instant; it is a length of time. They close their eyes and they are swaying like the trees.

-- Mallory Nezam
Posted by Tony Renner at 9:45 AM No comments: