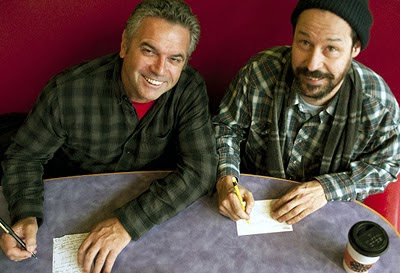 Chris Parr and Tony Renner, co-founders of Chance Operations.
[Photo by Josh Maassen.]
Ben Moeller-Gaa says "STL folks. This Monday we will bid adieu to the Chance Operations Reading Series. It was started in 2010 by the righteous Tony Renner and Chris Parr and has served the community well. I know I've had the pleasure of being a featured poet there several times. The final night will be a big Open Mic fest. If your free, pop on over for one last night. And bring a piece or two to read along with your two eyes and two ears for taking it in. Things begin at 7:30PM at the Tavern of Fine Arts, 313 Belt Avenue. As always, admission is free."

In addition to a full menu, Tavern of Fine Arts features beer from Civil Life Brewing Company on-tap as well as an extensive wine list.

Chance Operations has been a monthly reading series co-curated by Chris Parr, professor of religious studies at Webster University, and artist Tony Renner.
Posted by Tony Renner at 1:26 PM 4 comments: