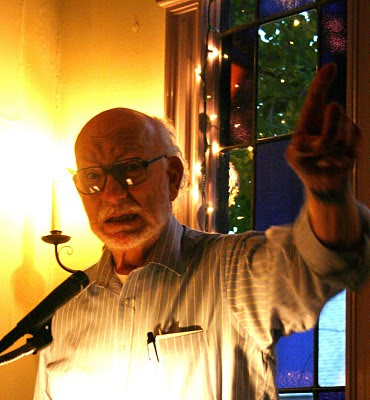 On August 2 at Duff's, Prison Performing Arts board member Danny Kohl read a selection of poems by Patricia Prewitt.

Loyal as a pitbull, she would draw fists for me,
Curse like a pissed-off pirate for me,
And even steal for me, if need be.

Her temper was hair-trigger, as huge as her love;
But anger was her most comfortable emotion;
A fierce self-described Captain Sav-A-Ho,
Except when it came to saving herself.

Twenty years ago that city gal made fun of my honesty,
While this cowgirl was put off by her vulgarity;
But we grew as sisters bonded by love and respect,
Even when she called me a John Boy fucking-Walton.

Mick taught me to use the f-word;
To embroider it creatively between syllables,
Adding color and texture:
Un-fuckin-believable,
Insta-fuckin-gator,
Sancta-fuckin-monious.

Her fragile childish innocence had been mutilated
By the men who should have protected her.
This unhealed hurt was too painful to endure,
Even after 50 years --
Without mother’s numbing little helper.

Heroin owned Mick;
He only released his death grip
When she was safely locked up with me.
Saturday heroin killed her in Saint Louis
And discarded her body like garbage on the street.

But heroin can’t kill the spirit of Mickie;
She’s woven into my soul and
Alive with me for-fuckin-ever.