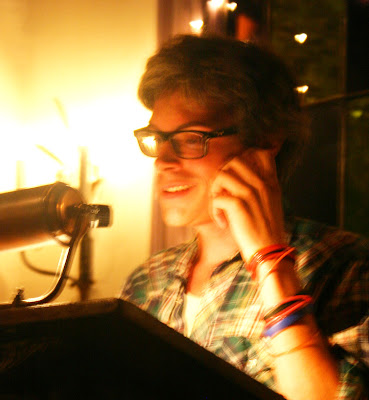 On August 2 at Duff's, James Weber read a selection of his poems. Click here to read more poems by James.

When Jasper opens arms to include
Iron, he chooses to transcend chert.
When Jasper ornaments a wall, he occupies
a poor girl’s sad fortune, even
a’courted. With no moon left, Jasper
jerks a green thumb and plants
a disco ball atop a lightning rod.
This is a beacon for the kids.
When Jasper requires snuff box, snuff
box appears if requested aloud.
To vocalize needs is to return a letter.
Jasper ain’t easy to love, like
a cowboy, and busts combinations
of pants and maybe a “Love
in Vain.” Honey bees faked a death, buzzed
all night long. If Jasper got
a nickname, it’d be in discretion “Well,
Buzz Awhile.” If your Humboldt County author
exasperated and hairless and freshly farmer
tanned got hi-speed 1988 boom-box dubbed
a slid heart-lost-your-mind or and hilarious
A.K.A., a summer, stage, pen or assumed
name, assured it would be “Sting It,
Then.” Everyone rightly insists no
half-steppin’ where focused
disowners thrive. So Greek meals aside
and cast, and Grecian folk film myths crumbed
off establishment tables, no backyard boiled on
single kerosene burner singing C-130 Hercules
prop tone mini-love, that is, no straight
swooped Nike brand captured phrase, please baby.
This is a real they never get. Do,
Jasper, and the world will forget.