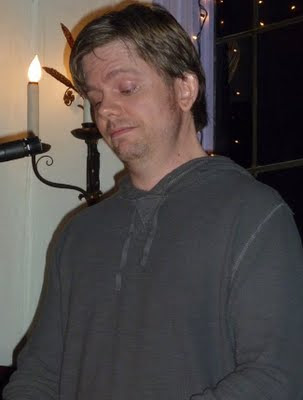 Colin Michael Shaw was one of ten readers who stepped up to the •chance operations• open-mic at the April 4 reading at Duff's.

Awkward introductions and casual fumbling
Relieve the tension and excuse the shaking girl
Who sat where you belong,
Lovingly weaving the basket I can put my feelings in later.

But I can’t see your simple spring cotton, ordinary beauty, sensible shoes...
Only your North City lights,
“Little lavender colored mints,
Teacups hung on hooks,
And pirate’s flying saucer”-
Because the multicolored jewels that spill from your lips
Make me “feel like I have tears in my eyes”.

So I close them, acquiesce,
To concentrate on your careful telling,
Of “scribbled notes in dove-blood ink on yellowed vellum”,
Delivered by the harried prophet from outside the cafe,
To you, then me --
Secret whispered from the edge of my memory,
Told softly as Grandmother’s hands, neatly folding linen napkins,
And a with kid’s smile, behind intelligent eyeglasses
Now I know what he said, but won’t repeat,
In a language I can’t speak,
But now understand.

-- Colin Michael Shaw
Posted by Tony Renner at 7:03 AM