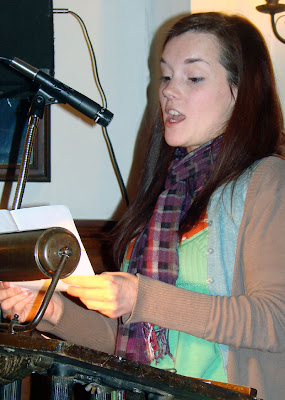 Erin Wiles was one of several open-mic participants at the January 24 reading at Duff's. Erin is co-editor of Bad Shoe, which generally publishes work by women writers but for its next issue will accept work by men, and Erin read a poem by Matt Freeman that will appear in Bad Shoe.

Bad Shoe is accepting submissions for their next issue until Saturday at midnight. Erin says, "We also take submissions on a continuous basis from the ladies, so anything sent past Saturday will be considered for the next issue.