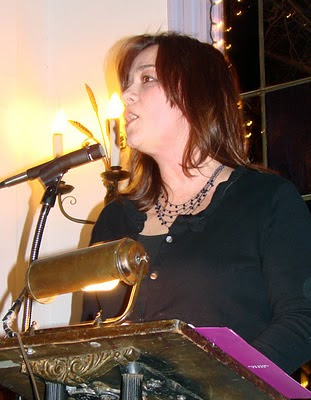 Lisa Ebert was one of the featured poets at the January 24 reading at Duff's.

A starry night where there should have been none.
The sky clear -- what was no longer there:
My Victorian dinosaur, my Argyle Avenue –- gone!
And reduced to rubble.
Its energy still reached out a bony hand,
the fornications and confabulations resonating still.

I made no living as a gossip columnist
-- only enemies –- like the blonde who cornered me
and demanded I cease and desist commentaries on her life.
It was born there, on Argyle Avenue, the newspaper
that fly-by-night rag,
alongside the dawn of our love, husband,
where we played house
and your cat leapt out the third-story window.

They built it wrong, anyway, set off the main strip
like that, useless for commerce, cumbersome dinosaur unrentable
but to student groups or twentysomething career girls, and gay men
who complained that our lively gatherings
rattled their ashtrays, until they joined in.

We trashed it and redecorated it, and danced
on the roof of it, high above the hard pavement,
manic and tripping over a sleeping roommate’s bedroom.

And didn’t we love that one guy, and didn’t we try to help him,
giving him a place to sleep, to store this stuff,
but we had no comfort for his father
who came to pick up his dead son’s things
who couldn’t know some of us really would grow up.

A place of doom, a white elephant:
Blondie, listen.
It wasn’t you I was writing about.

Author's Note: Argyle Avenue was a tiny side street off Euclid, the center of a grouping of three-story apartment buildings that no longer exists. The new Schlafly branch of the St. Louis Public Library replaced the buildings. Many transients enjoyed life at these apartments, including a ragtag group that founded a short-lived newspaper called SurFace Magazine, published by local St. Louisan Jeff Parks. For about a year, I penned a gossip column named "The Argyle Report" under the pseudonym Zoe G. that chronicled the doings of the live-music and club scene underground.
Posted by Tony Renner at 6:51 PM