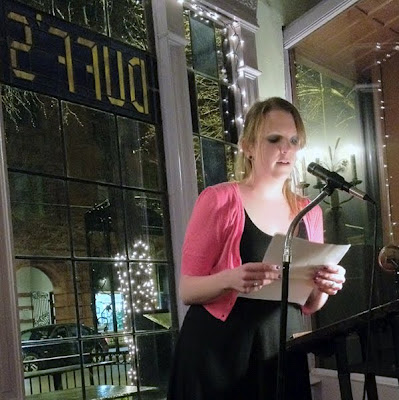 Christy Callahan will be one of three featured readers at the •chance operations• reading on Monday, April 30, at Duff's, 392 N. Euclid.

The other featured readers are Dwight Bitikofer and Will Kyle.

Christy Callahan earned a Bachelor of Social Work degree from the University of Missouri-St. Louis. She is currently studying for her MFA in Creative Writing, Poetry at UMSL. Christy's poetry appears in publications such as LitMag, Bellerive and Bad Shoe. When not attending classes, Christy works both as a social worker and a graduate assistant.

When spring came that year, my fifteenth year,
the Magnolia tree sighed and grunted,
and feigning interest would only produce
russet-colored brittle buds
and as they bloomed, then died,
my mom cried a horrible cry,
the sound tires make as they try to dig
their claws in to wet pavement.
Dad hid in the garage, twisting metal
and swallowing scotch.
When fall came that year, my fifteenth year,
the pine tree coughed and spat
needles across our roof,
clogging our gutters and tingeing it green.
My dad cried a horrible cry,
the sound a brake pad makes with its final grind
on the rotor before death.
Mom hid in the greenhouse,
planting Brazilian Verbena
and sneaking Pall Malls.
When winter came that year, my fifteenth year,
mom moved us to Manassas
where Magnolia trees never disappoint
and dad lingered in the garage,
awaiting the pine tree’s next move.