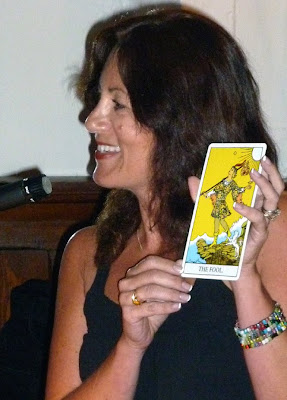 Julia Gordon Bramer was one of fourteen readers who stepped up to the •chance operations• open-mic at the June reading.

The next reading at Duff's, 392 North Euclid, in the Central West End, on Monday, July 25, will feature Christy Callahan, Sam Davis, and Erin Goss.

Ode to Dionysus
for Daniel Eberle-Mayse

There is the upsway mood of your tilted grin
turned toward the sky, as you step off the cliff
carefree: to blithely die, or be caught in net
spun from poems and smoke of your cigarettes.

Starting from zero, to the age of major
arcana, you’re stupid with wisdom, danger
from those verbal ecstasies that add the sweet
orgasmic meaning to your crash of defeat.

Among old scratch pencils, asylum minds, down
under the dungeon joys of a dark Boys’ Town,
beside detox junkies, you took the bad rap,
learned flesh’s mistrust, pity, and anger’s trap.

inside the six- to nine-month long sentences.
Wincing through that death-god’s life, I’m bent in this
wanting to watch over you, a mama moon.
All full silver cold sober; I know you still own

a blue blood throne --and all your pure parts can’t be
sold. At your birth, I decided to live these
clear days awake, as Empress Osmosis, High
Priestess of the Geekfest, Immutable Lie,

Tarot’s Queen of Wands, or maybe, your Sensai,
the one who lived before, now holding you here
as neither lover, nor son. Pupil, so dear
to this centaur. The Greeks wrote you torn alive

by jealous Titans. My pretty boy, you’ve died
already a thousand ugly lives. So, I
thieve your heart to kill redundant suicides,
twice-aborted and yanked out of Zeus’ thigh.

Push backwards, unbirth Homer’s Hymn, and your lies
past pain if it could still leave you with its gifts.
But no, instead I laugh at your self-stamped six-
sixty-six, and adore your half-dancing as

Devil Dionysus, Playful Pan, Bacchus
Boy, Emo Eleusinian Music Man.
The ambiguous truth is that meter falls
apart and I have no rhymes for how to love

someone like you, old ghost-crow present, floating
and electric, cute black hatchling, eclectic
darling, weighing the scales of lizard king.
An ominous omen, owning the moment.