Erin Goss to be Featured Reader at Duff's on Monday, July 25 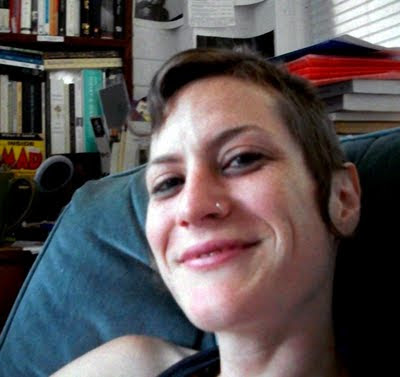 Erin Goss will be one of three featured readers at our next reading at Duff's, 392 North Euclid, in the Central West End, on Monday, July 25.

Also featured will be Christy Callahan and Erin Goss.

up. up. up. so hungry hope does not kill, ingane.
head so big so coco smooth, pink

Sesame Street with Big Bird and Snuffaluffagus on the block.
look up, umntanami, the colorful picture box:

Oscar the Grouch has no nose, no tail to swat flies or mud.
mean shaggy green thing pesters

passersby with the pot he pisses in, his garbage can kingdom.
Sesame Street abets such bullies.

but honey will end! our enchanted train ride is over. cookies gone.
the Count runs out of numbers awh awh awh.