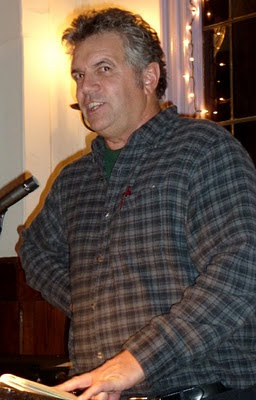 Chris Parr, co-founder of •chance operations•, took the opportunity presented by the February open-mic at Duff's to read a couple of new poems.

The next reading at Duff's, 392 North Euclid, will be Monday, March 14. Featured readers will be Kristina Marie Darling, and Buzz Spector. Musical guest will be Learn, Artist!; doors open at 7:30 p.m. Advance sign-up for the open-mic following the featured readers is encouraged. Cover charge is $3.00.

Beside Ernest Trova’s "Two
Poets Standing" I became
one poet slipping, the mud
& gravel beside the sculpture’s
concrete base softer than it
looked, from days of snow, rain.
My boots left deep divots,
gouged footprints. Color -–
lighter browns than the Cor-Ten
steel silhouettes, plus gravel grays.
Surface texture scumbled
where this poet stumbled, but
stayed on his feet, a third form
upright (just!)
& silhouette
in chill winter sun …
Posted by Tony Renner at 4:02 PM