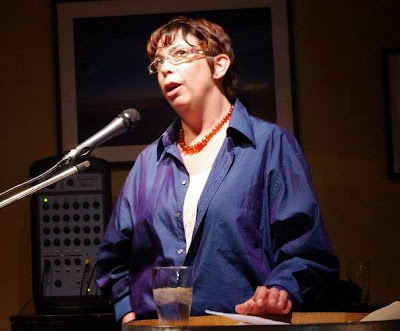 Susan Trowbridge Adams will be one of three featured readers at the •chance operations• reading at the Tavern of Fine Arts, 313 Belt Avenue, on Monday, December 30.

Susan Trowbridge Adams moved to Saint Louis two years ago because she’s impulsive when she’s in love, and has been fortunate to meet many socially conscious, creative, and talented people, some of whom have offered her paid work.

She likes rare steak, black dirt, Patti Smith, looking at urban wildlife in the yard, and sleeping with the window open.

Locally, Susan has featured at various venues around St. Louis including Poems, Prose, & Pints, Spiritual Jazz Meets PoJazz, and Jazz & Poetry in the Galleries," at the Missouri History Museum.

She has just finished recording her debut album, Strength, with music direction by her personal dude in the house Ted Moniak, whom she met at a theatrical audition in 1980.

The kid is frightened, and so very sad. It makes her
rude when she means to be efficient.
Her Daddy wants everything his own way
and if she doesn't act the way he likes
she can't even hug her baby brothers goodnight.
She loves them so much.

The kid is angry, she's feeling too raw
to be gracious in her Mother's house. She hugs
uncomplicated historyless affection
in a crowd of like-minded strangers;
joins their good work that does not ring in her ears
as choosing sides
or giving in, or giving up,
only giving.

The kid wants to smile but all she's got when she gets in the door
is a self full
of grieving and dilemmas and tired.
She would rather not be horrible.
It's just, she's got all this misery
and she can't help sharing.

The kid loves holidays, she loves traditions,
but right now it's all awkward.
The fierce auntie sleeps in her room,
Mama's not taking any more mess from Daddy
who turned around and won't talk to her oldest little brother;
big sister isn't a girl anymore
which just does not sit with her church,
and no one in this house seems to remember
the words to all the carols this year.

The kid spends her evenings on the phone
with her greek sisters and her mission friends.
The rest of us, we are all smelly
of expectations and conflict and the kind of need
you don't volunteer for:
You just do it. It's family. And the kid
really does not want to. She wants to
feel good about herself, but she's too young yet
to find the lines and walk them.

The kid tries every evening to be okay,
to make no waves, to get along
without getting with the program.
She whispers alone to mother.
She insults her brother.
She holds her oldest friends
and gets Fierce Auntie to share a movie.
Then someone went and made ham for dinner.
The kid does not eat red meat.

The kid has a quiet cloud of all wrong
smothering her heart and the fun of her.
She can't make it rain, she can't make it sun,
she's walking through the joint silent after supper
like a spiritual Pigpen
kicking up her own private dust.
She wants to feel grateful, and she only feels
twisted and needy.

But late, late and alone
she pads down to the living room
and maybe she's raining finally after all;
She orders all the animals awe-filled around the crèche
and in the morning
there is her Baby Jesus
glowing in the center,
with all the love she had left to give.