Henry Goldkamp Featured Reader at the Tavern of Fine Arts on Monday, November 25 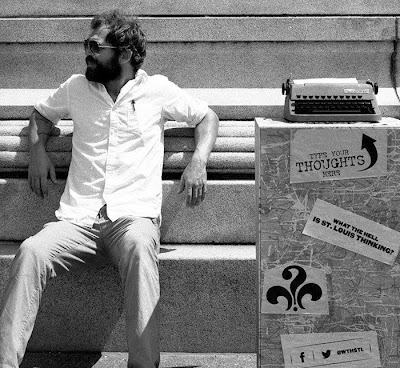 Henry Goldkamp will be one of three featured readers at the •chance operations• reading at the Tavern of Fine Arts, 313 Belt Avenue, on Monday, November 25.
Also featured will be Amy K. Genova and Julia Gordon-Bramer.


Born and raised in Saint Louis, Henry Goldkamp translated his skills as a union sheet metal worker into the medium of sculpture while simultaneously molding his craft as a self-taught poet. The latter led to the development of his poetry project, Fresh Poetry, Ink, in which he fashions poems tailor-made for passersby. His work has led him to collaborations with Contemporary Art Museum, fort gondo, KDHX, The Mayor’s Office of Saint Louis, Clayton Fine Art Gallery, The Masses, St. Louis Shakespeare Festival, Crystal Bridges, and many others.
Featured on NPR, Time’s art blog, and a multitude of local media, his recent project “What the Hell is Saint Louis Thinking?” spotlights residents’ typewritten stories across the city and her outskirts. The book of the project’s findings is due out 2014.
He is also currently running the Poetree Project, a city-wide participatory poetry project culminating with an installation of poems in Forest Park, Saturday, December 14th.

It is just
Me & Her
in a large new warehouse
with high ceilings
surrounded by mediocre portraits.
“It’s been so long
since I’ve felt so strange,” I say.
It echoes back
in the different voice of nonage
so I am unaware of its truth.
The sinews of flesh and synapse of thought
need not recite themselves:
To remember the poem
I need only see her again.
Is she so foolish to believe
a single traipse
of thought of another of another time
I’ll leave her?
I only love her
because of the drive
as I sit in the passenger seat
& the dashboard never informs me
that I am not wearing a seatbelt.
Her heart and snaggletooth
fidget with something harmful,
like a children’s matching game
of felones-de-se and stark bodies.
Each time I think of her
I trace her body with a certain type of chalk.