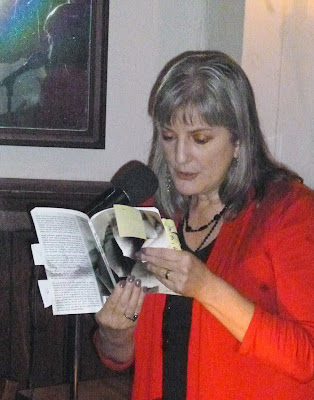 Drucilla Wall was one of two featured •chance operations• readers on October 29 at Duff's, 392 N. Euclid.

The next •chance operations• at Duff's reading will be Monday, November 26. Featured readers will be Chris Parr, celebrating the release of his new book of poems, Going to find it...; Julia Gordon Bramer; and Steve Schroeder.

Each leaf a single finger,
pointing at every angle,
smooth in the dense, bronzey canopy
that had expanded skyward
for a hundred years,
a mere sapling when the house
was built beside it.

Each leaf an exclamation,
terminus of trunk, limb, and twig,
pulsing the root telegraph
of water, earth, and sun.

I shot your portrait with the rippling bark
filling the frame around you,
a second presence blending with your hair.
We knew the comings and goings
of that raccoon nested in a hollow
higher than our roof. We saw
the songbirds of spring and summer
taking rest, the eagle alone in the dawn
on his way to the river’s hunting ground.

The black breath of the storm swept
from the west, killing the power,
and caught me at the shop,
away from you.
Your voice kept breaking on the phone,
“I am in the basement, with the cat,”
as if that would comfort me.

I would have run through the torrents
and lightning to get home,
only our daughter was with me.
Somewhere a transformer exploded.
Your voice hesitated, “Out the back,
it lit up for a second. The tree,
there’s nothing there—just bucketin’
down like a feckin’ machine.
I heard something, like the sea, rushing,
then the siren,
I am in the basement, with the cat.”