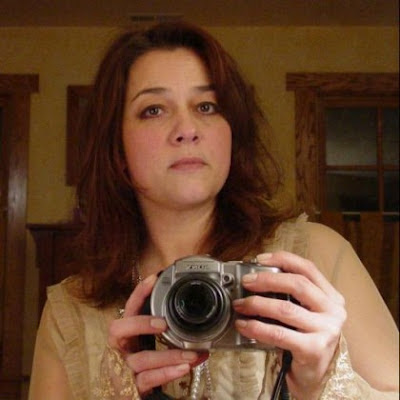 Lisa Ebert will be one of three featured readers at the next •chance operations• reading at Duff's, 392 N. Euclid, Monday, February 27. Also featured will be Matthew Freeman and Treasure Shields Redmond.

Some say that clowns are fearsome, but I say it’s the trapeze artist.
Zenia winks and flirts, spinning wildly, her dark mane a crown.
Hang on to your husbands! she says with her teeth.
The beautiful robber bride above, star of the show,
accompanied by the circus organ, and the noises of the crowd,
makes life go away -- under her spell.

Or maybe the Ringmaster is star; with flailing arms, his hearty welcome,
funny, flirtatious, and he calls himself Ted, like Ted Bundy, he laughs.
His eyes lock on mine -- it’s electric. I can’t be wrong, for I’m smart.
We’re the fruit of this magic, and his head cocks, and he promises:
wonders we’ve never experienced! All in exchange for a bit our time,
for feeding his spirit, and he smiles in my direction. Mine.

Performers parade: Rosalind, the bewitching snakecharmerbellydancer;
small people with poodles; barkers selling popcorn; a prancing pony girl;
and the clowns, with their juggling pins and sweepers, and antics, and whistles.
We are given over, huddled together in the small tent, the traveling tent,
the old-fashioned carnival of souls. The air thickens, the air makes me drunk.
We cheer for more, we hoot, we are carnivores.

Ted the Ringmaster calls us rubes, and then smiles, and he waits.
It takes time to feel the hit, the confusion, and the audience boos gently,
and the organ notes crash, and his face darkens.
“Very well!” Ted bellows, “I shall end the show. Go home.”
How we change when someone opens our trapdoor,
revealing the chasm inside.

In the awkward divide, the sound of a sputtering I.V. line, strapped to my arm,
its needle deep, snaking down under the dusty wooden bench, brings me pain.
Brings the audience sudden pain. We beg. We offer more flesh.
He smiles, and the drug returns. What pathology is this?
There’s a monster in the tent, and we’re all in danger. But he loves me best.
I didn’t boo! I felt sorry for him. I’m on his side!

Zenia’s laughter cues the music, resumes the show, and she scatters glittering magic dust.
The pot is boiling strong now. I grab my companion’s skeletal hand,
in breathless anticipation, and all the season ticket holders are skeletal.
And Rosalind, the lovely snakecharmerbellydancer is missing her legs. They’ve been severed.
She longs to go home but is handicapped, trapped. And there are scars on the clowns,
fur missing on the poodles, and the children rage or weep, destined to be one or the other.

I know Ted the Ringmaster is corrupt, and I know he’s married to Zenia,
but I know he prefers to be with me. He waves his arms and splays his feet,
and bellows the wonders of his show, and it wasn’t a lie, exactly.
He wants me in this menagerie, locked in a curio cabinet, unquestioning.
Forever, if I can take it. And if I can’t, I can go. I’m replaceable.
Someone else will buy a ticket, even someone less perfect.

How long have we been here? An hour? A year? The clowns dance about,
scooping up portions of themselves, taping them back on. The music
roars away, the skeletons applaud, the ponies prance clumsily.
The world is unimportant, unreal, empty and cold, and I don’t want to go back.
The drip is warm, and half of me. It is me. I’m too smart for tricks, he said.
There are no games here, he said. We’re deeply connected.

This show was never for me; it was for the monsters. We were for them.
You out there: you could never imagine the wonders inside; you think I’m nuts.
You don’t believe me. My story dissolves.
But you haven’t drunk the kool aid.