Daniel Eberle-Mayse Featured Reader on Monday, August 22, at Duff's in the C.W.E. 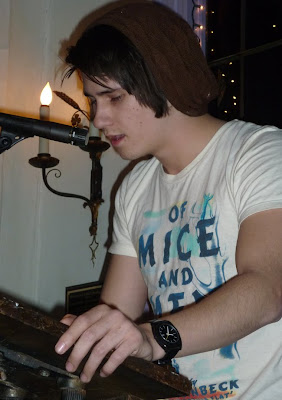 Daniel Eberle-Mayse will be one of three featured readers at the next •chance operations• reading on Monday, August 22, at Duff's, 392 North Euclid, in the Central West End.

The other featured readers will be Erin Wiles and Shane Signorino.


Daniel Eberle-Mayse's greatest career obstacle may not be his prison record, tendencies to hang with ne'er-do-wells, or the fact that Facebook has tagged pictures of him drunken and unconscious under a coffee table. No, his big challenge is probably going to be surmounting his ridiculous cuteness, kind of in the way that David Cassidy, a pop star well before Daniel's time, would never be taken seriously as a musician. The fact is that this young man's scarily good poetry and prose will likely hold its own with any ugly and respected writer long after he is gone.

It's an easy connection to relate Eberle-Mayse to the beat poets like Ginsberg and Kerouac. With a closer read, however, one can glean that this boy's got about five decades of reading, writing and life experience packed into his slim emo jeans and mere 22 years. Read Daniel Eberle-Mayse and you'll find the dark weirdness of Kafka, the humorous watchfulness of Vonnegut, the confessional tones of Lowell or Sexton, and the smart word-play of Plath. Right now, Daniel is a student at St. Louis Community College-Meramec, where he is studying writing, acting, and life.

Ghost-crows play on powerlines. Shoulders
smooth sparkle planes, charcoal wings,
undulate on the edge of half-sleep
like a sick child's tummy as he heaves
but still soft.
Platitudes we can't recall.
Breathe in night wind.
It's poison like no other nostalgia.
Gliding backwards,
the breeze doesn’t go clockwise,
and the current runs both ways

-- Daniel Eberle-Mayse
Posted by Tony Renner at 9:13 AM