James Weber to Read at •Chance Operations• on Monday, August 2, at Duff's 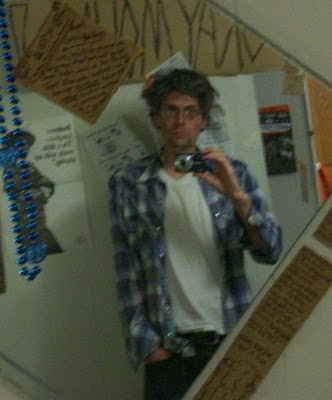 James Weber says, "Now 34, belaying down the Mississippi Man to build something new for a time, I sometimes in the past/future played/will-play rock and roll music, a Salvation Army low-budge Right Angle of History, a Castor/Pollux speed trial between Funny and Sad and so Formula 1 fast F. and S. melt together like Einstein's space-butter or a constellation called Par-Kay. It's all awkward any way we turn, but we're all in this together, 600 miles away or just down Grand or Esplanade. Buildings are neat, pop music neater, and I am in love with a lovely jazz-singer who suicided in 1960 named Beverly Kenney. Also quite nervous about this whole thing."

In an only nineteen minutes
Carrie Careens gives circular
and perfect-bound and child proofed
dissertation. I suspect
Africa or in specificity, Gambia
speed tested plus anti-bellum'd
and low with disease. See,
when ashtrays become stack'd
and apostrophe'd for a joke, we develop
games or a vibration to say
hey (and not the "Say Hey Kid",
I'll figure that grammar tomorrow)
maybe someone in the Big City may
be a'thinking of you.
This is another apostrophe. If you fold
circles and two dimensional
into a third dimensioned coned, Deanna Dementia
who resides in Colorado is pleased
with scissors and an Elmer's Glue-All
glue. In an only nineteen years
a brakeman becomes card deck
plus one. Jack of Hearts is annually
planted against flask pocket. A knife, a nude
annuitied gives life. A broad
young or supposed goes for broke.
We may give in to specifics or
-ity. We may invade Gambia. We may
deserve whichever oil plume
descends against dispersants, which is not
a word. We may say, "Hey, kid. I'll
figure the grammar tomorrow." And tomorrow
will forever have to be O.K.
Posted by Tony Renner at 7:44 AM