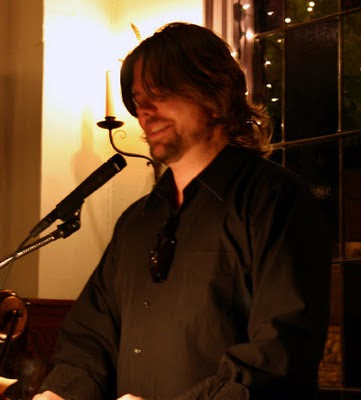 We rolled into Elephant Butte at Truth or Consequences, New Mexico, in the afternoon, wiped out from our stay with Ernie in Las Cruces, as Rudy’s nephew Cipriano has watered us down with great enthusiasm there. DogWolf appeared at a little food stand with a giant wooden Sasquatch holding a fish out front. He introduced us to the proprietor, Two Bulls, a small and quiet man who took us down the hill to show off the little nightclub he was having built. After touring the tiny construct, we all agreed that we’d best reconvene under cover from the glaring afternoon sun at the local inn for some refreshment.

Back at the inn, situated within a breathtaking view of the lake and surrounding mountains, Kevin and I secured a room around the corner from DogWolf’s and retired to the lounge. There, Rudy and DogWolf shouted back and forth, laughing at each other's expense, recollections of wilder days gone by, while DogWolf’s wife and Two Bulls bummed Marlboro Lights off me. DogWolf refused our money, calling round after round until we were good and drunk. Just as we were about to move the party up to our room for an impromptu jam session on guitar, Two Bulls, who had barely uttered a word the entire evening spoke up, "You guys want a little medicine?" Rudy lit up with a big grin, "Yes we do!"

Back at the room laughing and drinking continued, as Kevin, DogWolf, and Rudy played and sang. Two Bulls popped in the door then, opening his tobacco can to reveal the magic ingredient for an entirely different kind of evening. We all greedily took our rationed dose and partied on. It wasn’t long though before everything had suddenly changed for everyone, but for myself, a Missouri boy far away from home in that strange Southwestern land, like never before. After the initial laughing match with Rudy, I began to see colors and patterns in the setting sun, becoming one with everything around -- the mountains and sky outside our room, the ceiling and wallpaper, the faces of my friends. I must have been wide-eyed, as Two Bulls looked at me knowingly, "That’s some good medicine, huh?" He continued on, seeming to speak from inside my head, "People come here... They don’t know anything. They don’t know about this land, who was here before us... What’s going on...."