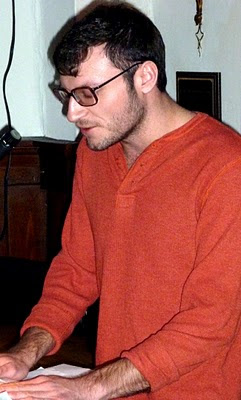 Ryan Smith was one of several open-mic readers at the February •chance operations• reading at Duff's.

The next reading at Duff's, 392 North Euclid, will be Monday, March 14. Featured readers will be Kristina Marie Darling, •chance operations• co-founder Chris Parr, and Buzz Spector. Musical guest will be Learn, Artist!; doors open at 7:30 p.m. Advance sign-up for the open-mic following the featured readers is encouraged. Cover charge is $3.00.

At night you tune the radio between stations
and return your arms to the light bones of her sides
like shells you return imperfectly to the sea.
You need the solvent of the wrong tuning,
reminding you of the whales that pod in the waters
between two harbors, nesting pavilions of squid,
the comforting wax of ambergris in their bellies.
Half-songs interrupt either side of this tuning
like children’s bodies do the shallows, the branches,
the mud,
until you can will them away. Until
at once, there is only a hiss, the rustle of dry skin
sliding over stones. And you recall the skin you found
sloughed off entirely, once, still pieced with a pattern
of earthen jars, dark as still-wet driftwood.
Its tail pinched between your fingers, its architecture
spilled like a staircase.
Your arms return then
from her sides, and in their passing your palms brush
over a rib, as though to catch their rough patterns
on the weight of it, unravel them. They of course remain,
as does she, and that is the tenderness of you both.
When you come apart, you will not do it whole.