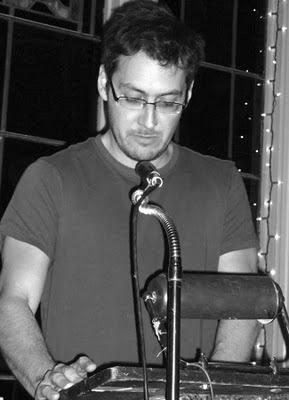 Daniel McGrath stepped up to the open-mic on March 14 at Duff's.

The next reading will be Monday, April 4, at Duff's, 392 North Euclid.

Advance sign-up for the open-mic following the featured readers is encouraged.

Daniel read an English translation of the then Archbishop of Glasgow's cursing of the reivers in 1525.

Good folks, (herewith) my Archbishop of Glasgow's letters, under his round seal, directed to me, or any other chaplain, making mention with great regret, how heavy he bears the pitious, lamentable, and dolorous complaint that passes over all realms and comes to his ears by open voice and fame, how our Sovereign Lord's true lieges, men, wives, and children, bought and redeemed by the precious blood of our Saviour Jesus Christ, and living in his laws, are innocently, some murdered, some slain, burned, hurt, despoiled and cut openly by daylight and under silence of night, and their farms and lands laid waste, and themselves banished therefrom, also church lands as well as others, to be common traitors, rapists and thieves, dwelling in the south part of this realm, namely, Tevidale, Esdale, Liddesdale, Ewisdale, Nedisdale, and Annandereaill; they have been, in diverse ways, pursued for punishment by the temporal sword of our Sovereign Lord's authority, and they fear not the same. (The church has condemned them in fear for their souls, and it has no prohibitory effect on their actions)

And therefore, my said Archbishop of Glasgow has thought it necessary to strike them with the terrible sword of Holy Church, that they may not long endure and resist; and has charged me, or any other chaplain, to denounce, declare and proclaim them openly and generally cursed, at this market crossroads, and all other plublic places.

Herefore, through the authority of Almighty God, the Father of Heaven, His Son our Saviour, Jesus Christ, and of the Holy Ghost; through the authority of the Blessed Virgin, Saint Mary, Saint Michael, Saint Gabriel, and all the angels; Saint John the Baptist, and all the Holy patriarchs and prophets; Saint Peter, Saint Paul, Saint Andrew, and all holy apostles; Saint Stephen, Saint Lawrence, and all holy martyrs; Saint Giles, Saint Martin, and all holy confessors; Saint Anne, Saint Katherine, and all holy virgins and matrons; and of all the saints and holy company of Heaven; by the authority of our Holy Father the Pope and his cardinals, and of my said Lord, Archbishop of Glasgow, by the advice and assistance of my lords, archbishop, bishops, abbots, priors, and other prelates and ministers of Holy Church:

I denounce, proclaim and declare all the committers of the said senseless murders, slaughters, burning, torturing, plundering, raping and pillaging, openly by daylight and under silence of night, even on such peaceful ground as church lands; together with their families, henchmen, suppliers, and willing conspirators who give them refuge, their receivers of goods stolen by them, and any benefit or part thereof, and their counsellors and defenders of their evil deeds, generally CURSED, denounced, execrated, in sum total, with the GREAT CURSING.

May all the malevolent wishes and curses ever known, since the beginning of the world, to this hour, light on them. May the malediction of God, that fell upon Lucifer and all his fellows, that cast them from the high Heaven to the deep hell, light upon them.

May the fire and the sword that stopped Adam from the gates of Paradise, stop them from the glory of Heaven, until they forebear, and make amends.

May the evil that fell upon cursed Cain, when he slew his brother Abel, needlessly, fall on them for the needless slaughter that they commit daily.

May the malediction that fell upon all the world, man and beast, and all that ever took life, when all were drowned by the flood of Noah, except Noah and his ark, fall upon them and drown them, man and beast, and make this realm free of them, for their wicked sins.

May all the plagues that fell upon Pharoah and his people of Egypt, their lands, crops and cattle, fall upon them, their equipment, their places, their lands, their crops and livestock.

May the waters of the Tweed and other waters which they use, drown them, as the Red Sea drowned King Pharoah and the people of Egypt, preserving God's people of Israel.

May the earth open, split and cleave, and swallow them straight to hell, as it swallowed cursed Dathan and Abiron, who disobeyed Moses and the command of God.

May the wild fire that reduced Thore and his followers to two-hundred-fifty in number, and others from 14,000 to 7,000 at anys, usurping against Moses and Aaron, servants of God, suddenly burn and consume them daily, for opposing the commands of God and Holy Church.

May the malediction that suddenly fell upon fair Absolom, riding through the wood against his father, King David, when the branches of a tree knocked him from his horse and hanged him by the hair, fall upon these untrue Scotsmen and hang them the same way, that all the world may see.

May the malediction that fell upon Nebuchadnezzar's lieutenant, Olifernus, making war and savagery upon true christian men; the malediction that fell upon Judas, Pilate, Herod, and the Jews that crucified Our Lord; and all the plagues and troubles that fell on the city of Jerusalem therefore, and upon Simon Magus for his treachery, bloody Nero, Ditius Magcensius, Olibrius, Julianus Apostita and the rest of the cruel tyrants who slew and murdered Christ's holy servants, fall upon them for their cruel tyranny and murder of Christian people.

And may all the vengeance that ever was taken since the world began, for open sins, and all the plagues and pestilence that ever fell on man or beast, fall on them for their openly evil ways, senseless slaughter and shedding of innocent blood.

I sever and part them from the church of God, and deliver them immediately to the devil of hell, as the Apostle Paul delivered Corinth. I bar the entrance of all places they come to, for divine service and ministration of the sacraments of holy church, except the sacrament of infant baptism, only; and I forbid all churchmen to hear their confession or to absolve them of their sins, until they are first humbled / subjugated by this curse.

I forbid all christian men or women to have any company with them, eating, drinking, speaking, praying, lying, going, standing, or in any other deed-doing, under the pain of deadly sin.

I discharge all bonds, acts, contracts, oaths, made to them by any persons, out of loyalty, kindness, or personal duty, so long as they sustain this cursing, by which no man will be bound to them, and this will be binding on all men.

I take from them, and cast down all the good deeds that ever they did, or shall do, until they rise from this cursing.

I declare them excluded from all matins, masses, evening prayers, funerals or other prayers, on book or bead (rosary); of all pigrimages and alms deeds done, or to be done in holy church or be christian people, while this curse is in effect.

And, finally, I condemn them perpetually to the deep pit of hell, there to remain with Lucifer and all his fellows, and their bodies to the gallows of Burrow moor, first to be hanged, then ripped and torn by dogs, swine, and other wild beasts, abominable to all the world. And their candle (light of their life) goes from your sight, as may their souls go from the face of God, and their good reputation from the world, until they forebear their open sins, aforesaid, and rise from this terrible cursing and make satisfaction and penance.
Posted by Tony Renner at 12:55 PM