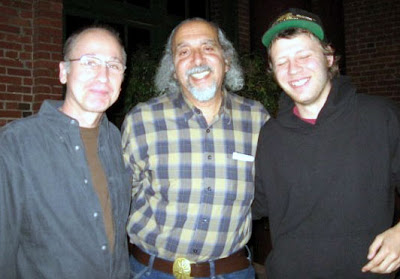 Phil Gounis, Michael Castro, and Sean Arnold.
Photo by Erin Wiles.
C.J. Smith of JKPublishing will be the guest curator of the next Chance Operations reading at Duff's, 392 North Euclid, St. Louis, on Monday, November 22.

Sean Arnold is currently a poet, anarchist, MC, visual artist, roustabout, and bread delivery truck driver living in St. Lucipher, MO. His writing chronicles the pretensions and directions of everything and nothing at the same time but, most importantly, often straddles the line between idleness and revolt of thought. His goals in life are thus far both grand and minute. Arnold was first transfixed with poetics as an angsty preteen. Now 22 years old, he has with his first book of poems, Soliloquy from an Open Summer Window, taken these inclinations to their most logical conclusion yet. However, this first book is just a stepping stone in one vast open letter to those left indignant and smarting from current political pastures, but also optimistic and secretly in love, convinced another world is possible.

Michael Castro has been called “a legend in St. Louis poetry.” Long active as a poet and arts activist, he co-founded the pioneering multi-cultural literary organization and magazine River Styx, in operation since 1975; and for fifteen years he hosted the radio program, Poetry Beat. Castro has given poetry readings on three continents, and has collaborated in performance work with a wide range of musical assemblages over the last three decades, recording four albums. He has published six poetry collections; two books of modern Hungarian poetry he co-translated with Gabor G. Gyukics; and Interpreting the Indian, a study of Native American influences on modern poets. He is the recipient of two lifetime achievement awards, having been named Warrior Poet by Word in Motion and Guardian Angel of St. Louis Poetry by River Styx. He currently teaches at Lindenwood University.

Ellen Herget co-edits Bad Shoe with Erin Wiles, and also has a chapbook published with JKPublishing entitled Thus Far. She has a cat; she plays music; she is fond of poptarts. She is in love with the Bad Shoe project and especially
proud of the current issue.

Colleen McKee teaches for both the English Department and for the Institute for Women’s and Gender Studies at the University of Missouri-St. Louis. Colleen's poetry has appeared in publications such as Poetry Daily, Bellevue Literary Review, Flyway, and Bad Shoe, as well as in several book-length collections of poetry. Colleen is co-editor of a book of personal narratives entitled Are We Feeling Better Yet?: Women’s Encounters with Health Care in America.

Nicky Rainey makes zines, writes grants, stories and letters to her pen-pals. A loud talker since childhood, she represented St. Louis in the National Poetry Slam 2009 (and Madison, Wisconsin, in the Rustbelt Regional slam in 2007). Nicky earned a hearty "BA!" from Truman State in English, and also studied social justice and how to make elaborate omelets. Nicky has a new zine made out of envelopes called Let’s Talk about People. Write her for a copy at n.k.rainey@gmail.com.
Posted by Tony Renner at 11:52 AM