Ellen Herget To Read at Duff's in the C.W.E. on Monday, November 22 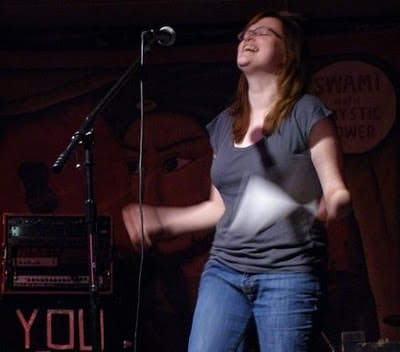 Ellen Herget will be one of the featured readers at Duff's, 392 North Euclid, on Monday, November 22, when Chance Operations turns the reigns of control over to CJ Smith of JKPublishing.

Ellen Herget co-edits Bad Shoe with Erin Wiles, and also has a chapbook published with JKPublishing entitled Thus Far. Bad Shoe was a 2010 recipient of a Kick Ass Award, given to "individuals, businesses, organizations and projects that contribute to the health and vitality of the St. Louis region." She has a cat; she plays music; she is fond of pop tarts. She is in love with the Bad Shoe project and especially proud of the current issue.

and we were arguing in a pig's-blood-red
Chevy convertible, the old style
with fins and matching upholstery.
You were in your yellow checked shirt
and bruised blue bandana.
We both smoked, parked in a generic light-speckled overlook
that I've seen in a thousand generic light-speckled movies.
I don't remember a word of what was said.
In the morning it was 2010
(o futuristic year)
and you were gone, just like the dream,
bolting out the driver's-side door
and bailing for the woods.

Our distantly placed
fellow astronaut friends
ask after you.
I have nothing to tell.

I think on your quick fingers
attached to blunt-instrument
limbs; you were clumsy
in the way of a bear,
knocking down saplings in your haste
to delicately dismantle a beehive,
to dexterously flick the scales off salmon.

I think on a figure eternally
perched between now and next,
hummingbird hovering -- hovering;
twenty years I'll never know about.
Few questions cast before wasps
moved in for the food supply.
And you darted away with a dark
thrum of wings, oh emerald bird
off to Elsewhere, where you are
tasting the wind and
hovering --
-- hovering.