Shane Signorino at May Open-Mic 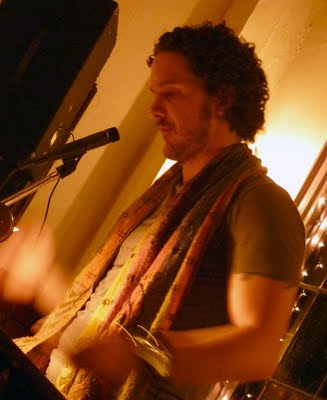 Shane Signorino was one of ten readers to step up to the •chance operations• open-mic at the May reading.

The next reading, at Duff's, 392 North Euclid, in the Central West End, will be held on Monday, June 27, will feature Phil Gounis, Will Kyle, and Nicky Rainey.

Anyone who has struggled with poverty knows how extremely expensive it is to be poor. --James Baldwin

speaking of job, i sure could use me a stimulus package cackles the Eddie Murphy meets Red Foxx taxicab comedian after spilling he knows who killed Kennedy

laughing aloud through his bughouse bound economic turnaround tactic . . . take
the muthafuckin money back from the crooked as shit banks we bailed out . . .

closing the sacristy doors on you love starving you back sliding you in this St. Louis thicker than butter milk summer heat