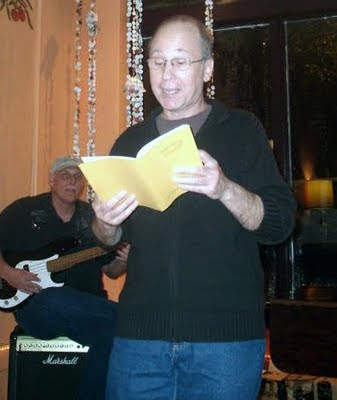 Phil Gounis will be one of three featured readers at the next •chance operations• reading, at Duff's, 392 North Euclid, in the Central West End, on Monday, June 27.

Also appearing with Phil Gounis will be Nicky Rainey and Will Kyle.

Phil first came into public awareness in the early 1970s when he and some colleagues filmed and presented a series of experimental films courtesy of the University of Missouri-St. Louis. At the same time he began to publish his poetry in many alternative press outlets. He also participated in poetry programs on KDNA FM radio. These readings later evolved into River Styx literary magazine.

Phil produced his first chapbook of poetry, Some of These Have Appeared, in spring 2007.

Upgrading the Allusion, his second chapbook, was published this year and is Phil's first collaboration with JKPublishing.

he wakes up remembering
how she spoke
it was the way that he thought
& he remembered too,how she looked
smooth & clean
even from a distance
& close up --
black, raven hair waved in springtime warm wind
revealing pearl like forehead filled with golden, girlie
notions of fun & frivolity
on late afternoon,urban sidewalk prance
all the while he studied her festive,dimpled smile
he squinted at her glimmering, child-like Snow Whiteness
silhouetted against the stark, grim Goliath cityscape
Purity is measured against our concepts of corruption
& she was so Pure
even now, he still builds mental shrines to her facial physiognomy
Rorschach Blots are in the mind of the beholder
he had tried so hard to make that all so evident
but she never could see the forest for the pulp (fiction)
What a punk she was!
they had been together when the decade was young
now they met again
in the interim
what had been blissed wonderment at just being alive
had become tortured bewilderment about existence
he groped for the middle ground between pain & numbness
when she asked,”How have you been?”
he said,”I could be doing better...”
across the street from their conversation
that same wind that had been warm
now was chilly
as it nudged an empty paper cup back & forth
in a constant semi-circle
the swaying cup never quite completed its intended cycle
--there’s a million of these cups blowing around