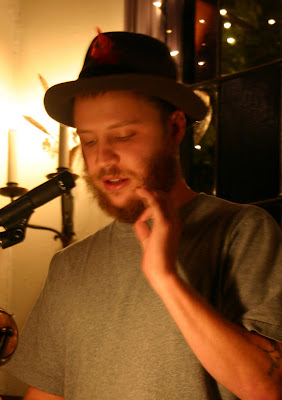 Sean Arnold was one of three featured readers at the September 27 Chance Operations reading at Duff's. Also featured were Julia Gordon-Bramer and Byron Lee.

shots ring out
jesus christ there's a lot of fires tonight
click clackity pen on grated steel like a song
a revolution
in that it's all,
as in the swinging hips of the thing,
in the nervous twitch,
to a beat machine,
hammering on the impulse
hammering out the impulse,
christening some new dawn with a tap,
flick of a match and smoke smoke
-- the wind brings upheaval,
thoughts are starving dogs wilting on the sidewalk,
the propaganda for the goods falls on sewn shut ears
coarse and beautifully sewn as everyday language,
fuck that motherfucker in the ass to hell
-- and so on.
steep and drawn out,
impending.
two men kissing goodbye (almost).
suspended in the lush impending,
sit
sit
sittin' in the waiting room,
the moon nearly cresting over light pollution,
nearly having a purpose.
the hanging man tow and a half seconds before the bucket kicks,
the suspended orgasm,
smattering across air like someone in the midst of CPR,
nearly coming to
finding it, finding it,
finding.
the word meander, at the E.
near suspended,
the corpse dangling across the dead body of theater.
mid-crash
-- a spinning out like a top
-- glass shards flailing in the middle of air,
nearly arms out.
a conversation just beginning.
the object in an acrobat,
brick on window,
again glass flailing,
stop motion in the act itself,
nearly arms in the air,
lighter to rag but just getting a whiff of gasoline,
taste it,
taste it,
the difference between an epic an a romance,
feeling less epic and more that last one,
waiting for her,
on the tongue tip,
the shots unfire and the fire truck takes back its sirens,
st. louis sleeps for now,
a tingle and stop
at the feeling.

[from Soliloquy From A Freight Yard Open Summer Window, 2010, the Saint Louis Projects.]
Posted by Tony Renner at 3:19 PM