Sean Arnold to Read at Duff's on Monday, September 27 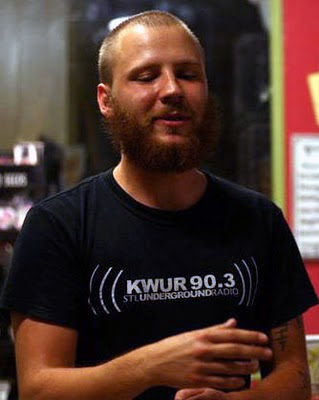 The next Chance Operations readings will be held at Duff's, 392 North Euclid, on Monday, September 27. Featured readers will be Julia Gordon-Bramer, Byron Lee, and Sean Arnold. An open-mic will follow the featured readers. Doors open at 7:30 p.m.; cover charge $3. Musical guest will be Dave Stone.

Sean Arnold is currently a poet, anarchist, MC, visual artist, roustabout, and bread delivery truck driver living in St. Lucipher, MO. His writing chronicles the pretensions and directions of everything and nothing at the same time but, most importantly, often straddles the line between idleness and revolt of thought. His goals in life are thus far both grand and minute.

Arnold was first transfixed with poetics as an angsty preteen. Now 22 years old, he has with his first book of poems, Soliloquy from an Open Summer Window, taken these inclinations to their most logical conclusion yet. However, this first book is just a stepping stone in one vast open letter to those left indignant and smarting from current political pastures, but also optimistic and secretly in love, convinced another world is possible.

$1.37: the cheapest cup of unsustainable solitude yet tucked in
the armpit of an acoustic breeze,
& folks with twice my eyes on a semi-back street unearthed by
brick red wings.
making digging motions in the armpithairs of loneliness,
an open invitation to sing loud if it at least rustles the hairs.
and if i’m lonely what the fuck are the young people supposed
to do without me?

fuck ’em. They can keep their society, belligerence,
i need a smoke and a gray prairie.

if you want a poet, i’m yr poet, but otherwise i’m a papercup
half-full of desolation out the window. you can have yr
air-conditioner culture,
the wind is hot but it’s nice, it tickles my arm hairs, these tiny
tallgrass blades, each one a different story, each story
a scorched desire to be different.
transformation is each throttling cartwheel of the wind.
i couldn’t write fast enough to catch it, but it’s still in my mouth,
fragmented, snagged in spit,
each dry accent a staccato breath,


it is knowing what you want in a world wasted off its ass
in post-post-modern superironic indecisiveness,
too cool for nothing is nothing to cool for.

sweating the devil out in its own wind, supergodless supergod
a steady forfeit of time to bones,
protestant anti-wind-ethic, bone grind annihilation, too slippery
for it, bursting clouds in the argument for a transient sort
of god,
the highrope of synaptic burn of not knowing what the hell
yr saying.
having time like i have nothing,
fighting off redundancies with a heavy sword,
hammering out the nothingness,
into a flat sheet of wind.

From: Soliloquy from an Open Summer Window
Saint Louis Projects 2010
Posted by Tony Renner at 8:10 AM