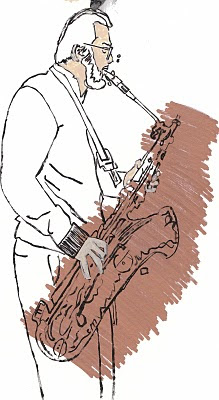 Dave Stone by Dana Smith
Saxophonist Dave Stone will be providing the musical interludes at the next Chance Operations reading, Monday, September 27, at Duff's, 392 North Euclid, in the Central West End.

Already signed up for the open-mic are Matthew Questionmark, Shane Signorino, Spit-Fire, and Erin Goss.

Whether it's jazz improv or free improv, Dave Stone's playing is known for its passion, intensity & inventiveness, a genuine and personal voice, a consummate musicality, and a propensity for singeing eyebrows and twisting knickers on a regular basis.