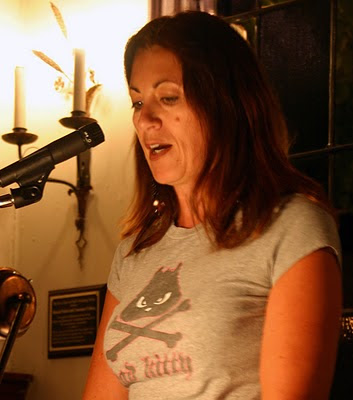 Julia Gordon-Bramer was one of three featured readers at the September 27 Chance Operations reading at Duff's. Also featured were Byron Lee and Sean Arnold.

Dave Stone performed saxophone improvisations before and after the featured readers and following the open-mic.

Splinter-friend, where are you
hiding within your own
hoarded creations: wedged in the waiting
to live, under the skin of the paint,
the fleshy space between the words
in the sorest forest of books? The impossible
sure for the eye to set and rest
on just one clean thing. I mean,
it hurts. That paper scatter of thoughts
and the cluttered piles of lack,
burying the faith you hold so dear;
It is rusting under the table. Here,
it’s hiding beneath the hair,
breeding in the dirt and lint
like a dirty sailor. You, virgin-girl unclean,
still trusting in an uninterested God. You asked
me once if I wanted
to rescue you,
if my intention was Hero. No, fair
maiden, I know I am
as safe as your old food;
too ripe, a Petri dish
of a million micro deaths. I know
I am tempted to lean
toward the edge, the black dots of toxic
mold on your window ledge.
I know that I’m fascinated
with the Biblical lies
evil tells, with the false
pictures of light,
with the blood wet prayers
to cold, dead air. I
know our hearts
are pure, and yet
I watch, rapt: you
tumbling through
a cluttered, junky heaven
where the too-bright closes its eyes
to the shine you force on the dust
and He will gloss and grant
your every careful, withheld plan.
He will reward your
everything that you’ve prayed-for,
He’ll give you room
to store, and store. He collects
every healthy vice because you
believe. Believe
you’ll find the right words in a magazine,
the right Pantone shade of green,
the perfect note
in a song you won’t sing,
and you hoard what you can
bear because
you know, you know, you know
He’s in there.