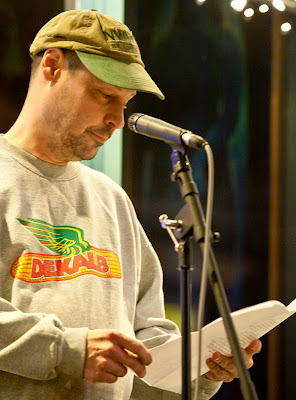 Tony Renner will be one of the featured readers at the penultimate Chance Operation reading at the Tavern of Fine Arts, 313 Belt Avenue, on Monday, March 28. Doors open at 7:30 p.m.; admission is FREE.

Also featured will be Matthew Freeman and Catherine Rankovic.

Tony Renner is a late bloomer. He returned to writing poetry in 2009 when, after he ran out of the poems he had written as a high school student in 1978 to post on a blog, he began writing new poems so that he could post a poem-a-day for National Poetry Month. He has been published in Bad Shoe, A Handful of Stones, and Troubadour 21.


On the Assassination of John F. Kennedy

"The President's been shot," he said seriously.
We heard about it; it was what we talked about.
Brains and blood and bones in an upward curve
And his body across the woman: that's what we imagined
Though we'd be proven wrong by slow motion film
Showing his body just as if we were there with him.
But we didn't stop looking; we haven't stopped yet.