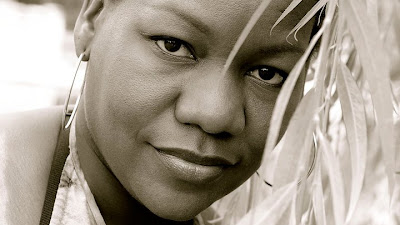 Treasure Shields Redmond will be a featured reader at Tavern of Fine Arts, 313 Belt Avenue, on Monday, August 31.

Also featured will be David A. N. Jackson and Cheeraz Gormon.

A Mississippi native, Treasure Shields Redmond is a St. Louis based poet, performer and educator. She has published poetry in such notable anthologies as Bum Rush the Page: A Def Poetry Jam, Breaking Ground: A Reader Celebrating Cave Canem’s First Decade; and in journals that include the Sou'wester and the African American Review.

the celluloid vision of jackie o
reflexively reaching for kennedy's brains;
too fast for even her
aristocratic hands.
did she think
she could put it all back together?
her archival papers
(now cool to the touch)
reveal she knew of his philandering --
her mother counseled her to stay .
so maybe that reflexive jump
on the back of a motorcade
was not as mothers flinch,
watching deathless sons
in football games.
but more as a runner,
anticipating the crisp gun shot.