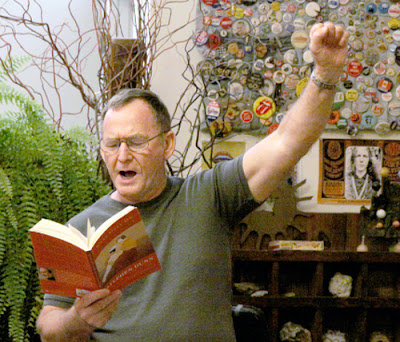 Dwight Bitikofer will be one of three featured readers at •chance operations• at Duff's, 392 N. Euclid, on Monday, February 25. Eamonn Wall and Emily Grise will also be featured.

Poet Dwight Bitikofer is active in St. Louis poetry circles where he often organizes readings that include poetry and music. In some of these he performs with a “spiritual jazz” musician to create “po-jazz.” Bitikofer has been published in several journals and has been a winner of poetry awards. Bitikofer is a publisher of community newspapers in St. Louis and is a native of rural Kansas.


Notes Bent on the Avenue Or Apocoli

There -- in the 8500 block of this street
–- there he stands on the sidewalk, tenor
sax drawn to his pursed lips, baggy black suit,
golden leaves swept by wind, somehow
his fedora stays in place as notes blow
through my open windows
–- makes me smile.

Here –- in the 8600 block of this avenue
she sits on a tall stool teetering
on the curb, her silver flute peels
a melody from below her blue scarf,
straight brown hair fanned
by merry breezes that carry her breath
from her lips into my car driving by
–- makes me almost want to cry.

Now I drive the 8700 block this autumn
afternoon, sun in the paling blue
of October and I see kneeling
the old man in faded green cap
grasping a banged-up blues guitar
strumming as if this were the last day
of the universe –- two chords make it
to my window and I grasp at hope.

Eighty-eight hundred block of this street
and there stands a proud, young man
whose gaze I remember. He puffs
his face, purses his lips and blows
life itself into the black stem of a clarinet,
fingers the silver valves. Years before
his conception I knew his mother,
and his grandfather and his uncle.
I see them all when he plays.
I gather his strength as he blows me by.
We are connected –- does he even know?

Eight-nine hundred on the avenue and yes,
there he is, the drummer, sun-tanned hands,
long fingers on the jimbay making a rain
of maple leaves, shaking down red heartbeats
of memory while sap slides and chlorophyll
withdraws, clearing windows on the street,
drumbeats talk to wind, drummer’s eyes
half closed, young face, old soul reaching in
and finding wisdom his mind can’t know
the beating heart held in his hands
reaches out, touches me as I drive by.

Nine-thousand block of this street now that curves
by the railroad crossing, there she stands, stout,
firm brown face lined with experience,
mouth crinkled at the corners by little joys
and ironies, where now she holds a silver
alto saxophone and blows a stream of unnamed
something at once mournful, joyful, as lights flash
and a train pounds by, a song evocative of words
not yet written, notes not yet played and I know
I still have miles to go and she will lead me.

This town, this sound, these turning leaves
through my open windows, imagining
on the breezes of a warm autumn afternoon
live performances blown outside
the jazz station on my radio.