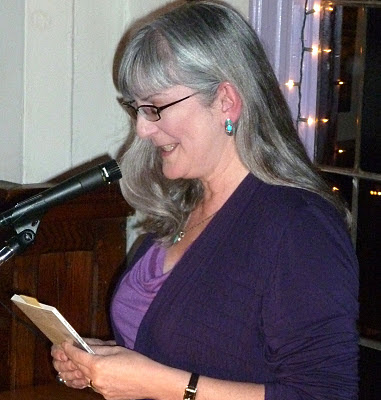 Drucilla Wall was one of three featured readers at the November •chance operations• reading at Duff's.

The next •chance operations• reading at Duff's, 392 N. Euclid, on Monday, December 5, will shine the spotlight on JKPublishing's Saint Louis Projects, including all the ladies and gents of Bad Shoe, along with their individual chapbook authors.

Doors open at 7:30 p.m., and admission is free for this special evening!

Also on hand will the publisher and editors of JKPublishing and Saint Louis Projects, Elly Herget, CJ Smith, & Erin Wiles.

My dog is not a hero.
He hasn’t tunneled 100 yards
through dirt and snow
in 40 below to drag me
firmly but gently by my hands
from certain death to the road.
He might someday bark and scramble
over the bed in spite of smoke
just in time to wake us people
to get out of there.
So far, he has never treed a bear
or run off a mountain lion,
or hauled a child out of a river,
or dialed the police all by himself.

His skull is so thick his neck gets tired.
He sheds enough to clog the hoover.
He’s good at eating, but not digesting.
His farts bubble up the paint on the wall
at the exact height of his ass.
He hasn’t yet braved a four-lane highway
to drag an injured fellow dog to safety;
never used his nose to locate someone
in the rubble; or dashed under the hooves
of a charging bull to distract it
from a man knocked to the ground.

He’s not as big as he ought to be.
One eye looks sideways all the time.
His hips aren’t right. We never knew
he could jump at all until that one time
he flew at that man kicking down
our door on a dark night in ordinary April.
The muzzle flash and the pop froze us,
as the bullet grooved his skull
right down the middle, ricocheting
into the kitchen, and, evidently,

the sight of my dog’s big head
shaking off the blood and surging
forward, with the rolling sideways eye,
and the streaming slobber
from the gap-toothed snarling maw,
determined beyond all sense
on a not-big-enough body
with its clattering paws,
was just enough
to make that gunman fall
back out the door and run.
My dog has a scar on his head
like the map of a river.

"Bullet Dog" appears in Drucilla Walls' book The Geese at the Gates from Salmon Poetry.
Posted by Tony Renner at 1:43 PM