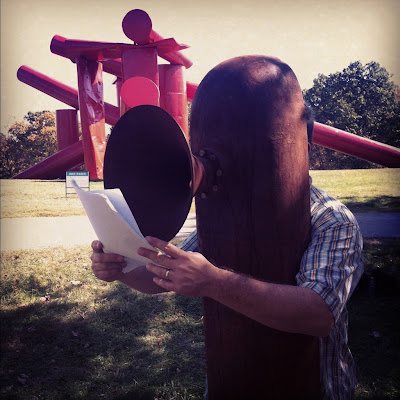 Chris King will be one of three featured readers at the next •chance operations• reading at Duff's, 392 N. Euclid, on Monday, November 28.

The other featured readers will be Julia Gordon-Bramer and Drucilla Wall.

Chris King is a multi-media artist and producer based in St. Louis who earns a living as a journalist. He co-founded Poetry Scores, which translates poetry into other media, and serves as its creative director. As a poet, he works in the 7/11 form innovated by St. Louis poet Quincy Troupe.


These poems are cast as 7/11s, a poetic form innovated by the St. Louis poet Quincy Troupe. Troupe’s form calls for alternating lines of 7 and 11 syllables, with 7-line stanzas when the first line has 7 beats and 11-line stanzas when the first line has 11 syllables. My 7/11s start with 7-syllable lines and then alternate stanzas of 7 and 11 lines, starting with 7; though I break all of these rules whenever the poem asks for it.

Music was sarcastic, and
nasty. It wore pink shoes. It was a bear on
a bicycle on its way
back to New Mexico. It made comfortably
sweet just one girl, with sagging,
cuffed pants. The banjo, actually, was the bear,
the bear in the pink shoes, pink

sneakers, as a fact, daintily laced and tied
with meticulous care as
a child unravels a lollypop. It’s sad
to say, but the people were
anything but equal to the music. They played
bartop card tricks, fed cigars
to their beloveds. Was one lad, danced, badly,
loudly, with all that bloody
bellowing from your man in the treble clef
hockey jersey. The barman,
only a boy, dispensed his abundant youth

to regulars, strangers,
snorted a wee bit of coke on the breaks with
the bands. --John’s got a new shirt
for Christmas. --Actually, I’ve had this awhile.
--But you’ve washed it! Music raised
a toast: Coal slaw! that’s happier days ahead,
and music really meant it,

happier days ahead, for you and for me.
For music was far from home,
again, on a cold night after Christmas, in
a bar and working, again.
Once more, lads, to the whiskey, and then attack,
again, the enemy in
your hands your instrument has become. Music
commits suicide early
every morning at the proper, appointed
hour, adjusted, of course, for
bar time.