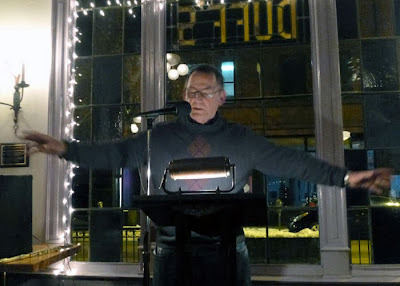 Dwight Bitikofer will be one of three featured readers at the •chance operations• reading at the Tavern of Fine Arts, 313 Belt Avenue, on Monday, February 24.

Other featured readers will be Ryan Krull and Mallory Nezam.

Dwight Bitikofer has involved himself with St. Louis poetry events for the past decade or so. His poems draw from experiences and places as far flung as driving taxicabs in St. Louis to harvesting wheat in Kansas to exploring castle ruins in Sicily to perspectives of life and earth from the windows of airliners. Bitikofer emcees a couple of local poetry events. He puts together PoJazz shows with local spiritual jazz musician Raven Wolf C. Felton Jennings II. He has been published in Natural Bridge, Untamed Ink, Mid Rivers Review and several other journals. His poem “Interrupted Crossing” won first place in St. Louis Poetry Center’s 2013 James Nash Poetry Contest.

In the light of headlights
a couple of car lengths distant
I saw the movement, the form,
the familiar low profile amble
and before a wisp of a prayer
could form, I saw it flop contorted
from below the wheels of the car ahead.

In a split second I might have flicked
my steering wheel to crush its body,
to make certain its life ended abruptly
and without more pain, but neither could I
play two tons of God quite so quickly,
nor could I bring myself to stop,
an action that could require more actions:
to examine, to find out if the animal
still lived or whether it would quickly die –
decisions, morality plays
for the sake of an opossum

Instead, I felt tears. Were they triggered
for an ancient marsupial brain
not yet adapted to dangers of trafficways?
Or for something unrelated,
some latent sorrow over missed connections,
over hopes that missed their mark?
Some old, old need ignored, run over –
some unrequited expectation receding,
left to flop, contorted -- alive or dead.