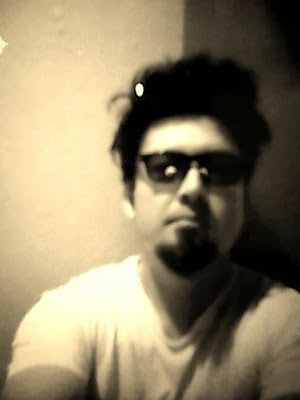 Jim McGowin will be one of three featured readers at the •chance operations• reading at the Tavern of Fine Arts, 313 Belt Avenue, on Monday, January 27.

Other featured readers will be Sean Arnold and Brett Underwood.

Jim McGowin tries to write and paint and take pictures when he isn't at his day job. He is particularly fond of the fusion of art and beer, and has thus read at locations such as Duffs (Chance Operations), Dressel's (Poems, Prose, and Pints), Sandrina's, Atomic Cowboy, and quite possibly some other places he forgot about. He also read on KDHX FM 88.1 once, which he thinks is pretty cool. One of these days he plans on organizing his poems into a book of some sort and giving copies away, because probably no one will want to pay money for one.

an unintended summer day
an unencumbered florid display
of rationale

an approach, like a roach,
cautious and bearing
gifts of antenna rubbings

loose thoughts for a rational man
wouldn't you say?
or maybe you wouldn't

seeing as how we have
already started our
trajectory to tragedy

the tragedy of gas giants

close
but never to be