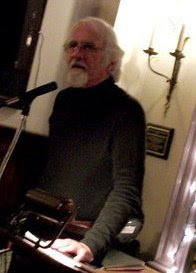 The award-winning Canadian poet Gary Geddes was one of three featured readers at the reading at Duff's on April 4, 2011, where he read his poem commemorating the May 4, 1970, Kent State shootings.