Erin Wiles Featured Reader on Monday, August 22, at Duff's in the C.W.E. 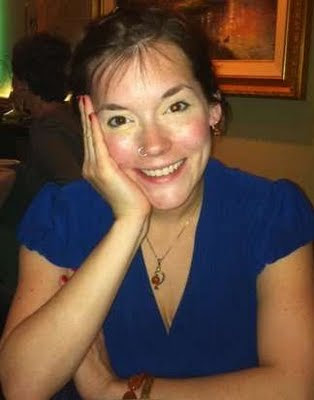 Erin Wiles will be one of three featured readers at the next •chance operations• reading on Monday, August 22, at Duff's, 392 North Euclid, in the Central West End.

The other featured readers will be Daniel Eberle-Mayse and Shane Signorino.

Erin Wiles hails from Ohio, where she got useless degrees in English and French while helping JKPublishing -- a homegrown, independent publisher of handmade books -- get on its feet and prosper. In 2006 she moved to Saint Louis, where she became marginally employed, started her own publishing division of JKP called the Saint Louis Projects, and had the pleasure to meet and perform with STL’s finest spoken word artists. She is co-editor of Bad Shoe, STL's only lit mag dedicated to the work of local women. She has written 2 chapbooks: Fractals (2008) and I & Apocalypse (2006), both available from JKPublishing.

Glancing at the bedside
stack of books he said he didn't know
any other girls who dug
on Rimbaud while researching
baby names. I thought there
was a good chance he hadn't ever known
any other pregnant girls at all
cuz if he had

he'd have seen the quiet hopscotch
between mortal options when one young
breeds young alone. And now that you've done
come here, baby, on your trip made so
frightfully alone, I can't say I did
quite the best thing, baby, in leaving
you live in a world that will forever leave
you, it will slip from your grasp
as easily as that first time

you will lose a helium balloon
to the shifting sky, baby. The world becomes
a pinprick that ellipses
so quickly you can never
be sure you saw it at all. People, too,
will leave you, baby, I won't wool your eyes

to say you will be all
she ever wanted, some one thing is always
wanted, and, like caught fireflies,
beauty flickers and dies
in possession. I read you
Rimbaud in utero, baby, maybe
in forewarning or bad taste, or

lack of anything else to say
but this: it will matter less
the choices you make than how
you make them, baby, and shame
is uglier than any nightmare
or four-lettered word. I can only
name you, baby, and spin this pinwheel
for you, baby, and maybe someday
I'll buy you a looking glass
and a mockingbird. Just be sure
to smash the glass,
baby, and let that bird fly free.