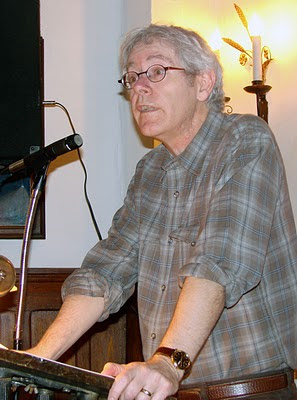 Eamonn Wall was one of the featured poets at the January 24 reading at Duff's.

The next reading at Duff's will be Monday, February 28, with featured readers Catherine Rankovic, Bob Reuter, and Steve Schroeder. Musical guest will be William Kyle. Advance sign-up for the open-mic following the featured readers is encouraged. Doors open at 7:30; cover is $3.00.

All entreaties to seek shelter he had
Brushed aside. It was morning. The
Darkened sky had unraveled quickly
To tornado hue. At times, nightshift
Duties ended late, he would show-up
Uniformed to teach at eight a band
Of ragged students in pajama pants
And jeans. He specialized in the
Fictions of Owen Wister and Zane
Gray and liked to say that America’s
Days of greatness had passed away.
Short of money, he took the extra
Job on account of sundry bills and
Student loans he was forced to pay.
Worked security for XYZ Solutions.

He was the single man set solo against
Our world. He perched himself among
Our building’s ancient rafters sure as
An old bell ringer in an Eastwood film.
We left him there, the boss of our dept.,
Holding his gun, and we descended as
A group to abide one another’s company
In our building’s basement. Each, in his
Or her own way, belonging to the un-
Requited heart of tornado alley, I thought
It prescient that none down here bore
Revolvers or blades concealed. Going
Postal: No, No, No! An hour to Mid-
Western lunch: tombed, and I was
Ravenous for my plate of bread, my
Square of cheese at sirens’ end. Though
It’s now forbidden, the man upstairs,
We all suspected, must surely light a
Cigarette. Freed at last by prevailing
Winds, pushing the storm eastward to
Iowa, we found our senior colleague
—Virginian. Aristocrat of Violence—
Blowing rings. His revolver rested
coldly between L’Amour’s Hills of
Homicide and James Joyce’s Ulysses.